A Meeting with Andrey Gritsman: Poet and Editor of International Poetry Magazine

On January 23rd, Andrey Gritsman, poet and editor of the international poetry magazine, Interpoezia, spoke to an audience of students and faculty at HSE in Nizhny Novgorod. 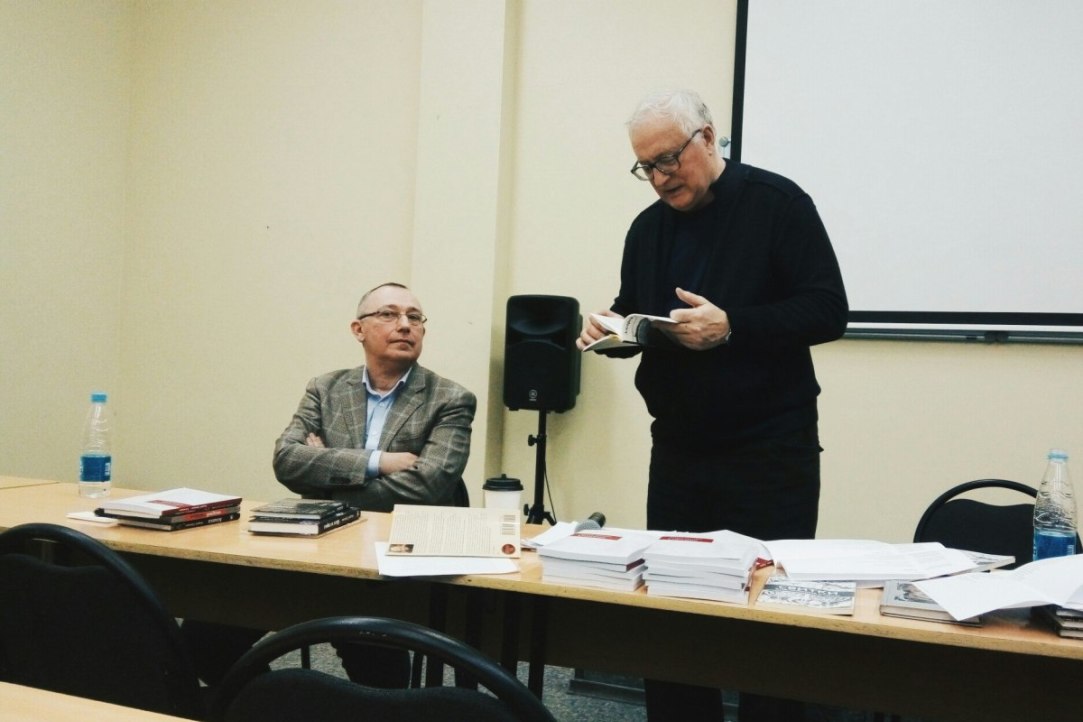 A lively dialogue was led by the poet, who has lived almost 40 years in the USA and is also a successful doctor and founder of a major international publication, Interpoezia. Andrey Gritsman read several of his recent poems for the audience, including works from his new book, Spetskhran (Спецхран). Many of the poems are dedicated to the big cities of the world; among them, Moscow, New York and Rome. His audience at HSE showed a particular interest in his bilingual poems, written in Russian and English. The poet explained that the integral aspect of such bilingual works is not the translation from one language to another. Rather, it is the expression of a particular topic, an intention, and the expression of sentiments, using different languages and cultural codes. What’s more, he elaborated, it’s not about ‘choosing’ one language over another at the moment the text is written. The language in which the poem is written depends on how the author is feeling. As the poet said, there are topics that can only be expressed in the language of one particular culture, and meaning is lost in another languages.

The meeting also involved discussion around contemporary Russian and American poetry in the USA. Andrey Gritsman mentioned several talented authors who, in his opinion, deserve recognition, and whose texts have been published in Interpoezia.

Philology students and head of the Philology programme, Maria Gelfond, shared their impressions of the talk:

Andrey Gritsman is an amazing person who lives two cultures simultaneously. His poems take us back to the Moscow of times gone by, that we will never see again. They take us on a journey to New York, where we can experience Russian culture and the very particular culture of a diaspora. In reading his poems, we see the world through the eyes of a Russian and an American at the same time, and it gives us deep and meaningful insights. Andrey Gritsman, a doctor by training, is also the editor of international magazine, ‘Interpoezia’. However, despite his status, he is very warm, very humble and his presentation was accessible to all. I would like to sincerely thank him and Valery Khazin for making this meeting possible!

Our meeting with Andrey Gritsman was inspiring. His work demonstrates that it is possible to express the same thought in more than just one language, using different words, and the result is two different poems. In the space of two hours, I visited Moscow, Brighton Beach and a hospital, and I entered the world of a Western culture. I understood how people try to express the same thought, but fail to understand each other, because one language describes one thing, and the other, something else. The lecture wasn’t limited to talk around poetry. Andrey Gritsman also shared his impressions of life in the USA, as well as who his favourite poets are and what it means to be an artist in this day and age. It was extremely interesting and enlightening.

Modern poetry is a very complex and multidimensional phenomenon. To many, it seems inaccessible, and that, ‘poetry is for poets.’ Meeting with the editor of ‘Interpoezia’, Andrey Gritsman, proved once again that this is not the case: in his poems and in the poems by the poets he spoke of - Sergey Gandlevsky, Boris Khersonsky, Alexei Tsvetkov, Bakhyt Kenzheyev - a voice can be heard, loud and clear, because these poems express real human experience.

The meeting was also important to me because it is proof that it is possible to do what you love, regardless of your occupation, regardless of context. Andrey Gritsman is a physician, and yet poetry and editing are not just hobbies for him- they are an essential part of his life. Heartfelt thanks to the author. We greatly appreciate the books he presented to the library of the Faculty of Humanities!

At the end of the meeting, the poet presented several books to the Faculty of Humanities. We thank Andrey Gritsman and Valery Khazin for sharing modern poetry with us at HSE. We would also like to take this opportunity to wish Valery Borisovich a very happy birthday on behalf of all the staff and students! We look forward to our continued collaboration.